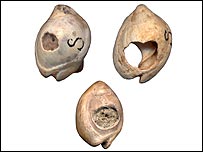 Archaeologists report in this week's Science that they have found shell beads in Algeria and Israel dating back to about 90,000 and 100,000 BP respectively. Humans drilled holes in the mollusc shells which would have allowed them to be strung as beads on bracelets or necklaces. This pushes back the previously known earliest date from 75,00 BP. The shells are from the same marine species as the 75,000 BP shells found in South Africa, suggesting a very conservative or stereotyped tradition (as is also the case for stone work dating this far back). The wide geographical spread suggests origins much earlier than even 100,000 BP. Furthermore, the Algerian shells were found in a cave about 200 km from the ancient shoreline, indicating long distance distribution (whether via trade or other transactions or just transport) of either the unworked shells, the beads, or both.

As I have previously explained, while these objects undoubtedly may have served some symbolic purposes, they were neither merely nor primarily symbolic. These necklaces were objects whose monetary properties, such as unforgeable costliness, divisibility, and security, were optimized given the available technologies (i.e. no metal working). These objects, which I have called "collectibles," differ from modern views of money only in two basic ways:

* They differ from many modern legal definitions of "money" (e.g. that of the U.S. Uniform Commercial Code) insofar as they were not minted or authorized by sovereign governments, hunter-gatherer societies having no such entities.

* Their primary uses were not for market exchange. Rather, by solving the double (or more) coincidence of wants problem, they solved more basic cooperation problems of kin altruism, reciprocal altruism, and the mitigation of aggression, and thus gained homo sapiens -- perhaps we should be called homo monetarius -- an important evolutionary advantage over homo neanderthalensis and other animals. This is probably also reflected in the human instinct to collect shells and other bright objects, an instinct not found in other primates and an instinct which would have allowed us to gain these advantages in cooperation over other animals.

Again my thanks to Ian Grigg for the pointer to this latest news.
Posted by Nick Szabo at 3:34 PM

I understand that wear marks were found on the Blombos shells, indicating that they had actually been worn as beads on necklaces. The news here only indicates that these older shells were perforated. If there's no wear marks, it's not ruled out that the shells were perforated in order to eat them rather than to turn them into jewelry. Still, the stereotyped nature of the tradition is eerily reminiscent of the earlier flint traditions and suggests a culture strongly constrained by instinct.

The proto-money theory of the jewelry is very interesting. The babble about jewelry as symbol is meaningless since jewelry has been said to symbolize a wide variety of things depending on the culture, and none of them seem very compelling on an evolutionary timescale.

The reduction of human fascination by "bright objects" to a history of exchange seems compelling indeed. There are other animals though, that share this feature, namely lots of different kinds of birds.

There it is said to work as a mating advantage, just like flowers use colors in attracting bees probably. Of course, one can learn more about humans by looking at the apes, where such behaviour is not common at all, as you say, rather than looking at the birds. I wonder though, if that would make a good or a bad null-hypothesis, or if such would be easy to rule out?