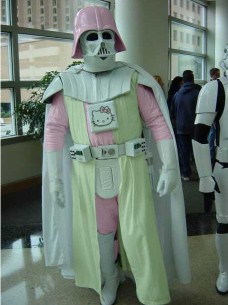 Nicholas Carr complains about the lack of human intervention in the calculation of many web search engine rankings. This popular viewpoint is like the silly final scene in the original Star Wars movie: turn off that darned machine and "trust the force, Luke." Never mind that web searches, like the torpedo or whatever that destroyed the Death Star, necessarily require complex technology, or that the algorithm can make billions of decisions in the time it would take Carr or myself or a Chinese firewall operator to make one. Carr bitterly complains that some commentary that he and I and Martin Luther King would find quite disagreeable comes first when you Google for "Martin Luther King." Out of trillions of possible short search phrases, Google's algorithm can be shown to produce an occasional poor result -- oh my!

Carr would thus like to substitute human judgment -- or more precisely, the judgment of some human who agrees with him -- for Google's algorithm. He makes the robotic assumption that a human is automatically more trustworthy than robot. After all, we are much more cuddly than robots. Like the humans that run the Chinese firewall, he fails to add.

But automata have often served as authority to great human benefit. In late medieval times, mechanical clocks replaced more erroneous or subjective time measures such as the sun or personal inclination. The result was that we be became better coordinated in all sorts of ways. The calculator on a cash register cuts way down on disputes over counting change. Entire professions like accounting, auditing, and the law, among others, exist because human strangers cannot, and should not overly pretend to, trust each other without some highly evolved, verifiable, and often repeatedly mechanical institutions. In other words, processes and rules.

Human trust requires being able to tell the "good guys" from the "bad guys." That only occurs among people who know each other well (and otherwise, in fiction). People who have gotten a close look underneath often misleading robes. For every other kind of relationship we depend on those loathsome processes and rules, as objective as possible. Whether we like to admit it or not, and we usually don't. And the people who don't are proud to say so. They sound like much more agreeable people if they just trust everybody, and expect everybody to trust them, regardless of how well they know or are known. Call them the Hello Kitty people. Until proven otherwise, each and every one of the six-plus billion people on the planet are angelic and adorable fuzzballs who can be fully trusted by everyone. Until disillusioned, Hello Kitty people purr with content. And thereby they come across as the most adorable of us all. As opposed to computer programmers or lawyers with our cold hard rules.

The Hello Kitty people are those teenagers who put their personal lives on MySpace and then complain that their privacy is being violated. They are the TV viewers who think that the Hurricane Katrina rescue or the Iraq war were screwed up only because we don't, they belatedly discover, have actual Hello Kitties in political power. When inevitably some of world's Kitties, unknown beyond their cute image, turn out to be less than fully trustworthy, the chorus of yowling Kitty People becomes unbearable cacophony.

The people who run search engines and other remote Internet companies are generally not our families, nor our close friends. They are not organizations we can come to trust merely based on their humanity. When it comes to strangers, human judgment is often far less verifiable, and thus far less accountable, than an algorithmic intermediary. When stranger trusts stranger, human judgment all too easily turns into human corruption. How many examples of strangers, or nearly so, killing each other, lying to each other, stealing from each other, and so on do you need in the news every day to be convinced that many strangers have other things on their mind besides your welfare? (Hint: the headlines are just the tip of the iceberg. Strangers harming strangers are vastly more common than an algorithmic Google ranking we'd all agree is erroneous).

With large institutions staffed by strangers (e.g. a big search engine company), the human appearances can be far more deceiving than for the people we know and therefore can rationally trust without the help of verified performance of rules. Among strangers a computer program, at least an open source one or one whose results can readily be tested by third parties, is often much fairer and far less corruptible than human judgment. The highly controversial area of web search rankings is probably one of the areas where this is the case. I usually trust simple objective ranking algorithms (e.g. those based on counting links) long before I trust the censorship of ideologized strangers like Carr or the censorious bozos on the Chinese firewall. But our emotional instincts evolved in small little tribes, and so there will always be countless Hello Kitty People to decry all these cold hard rules and programs in favor of their own fuzzy and cuddly illusions. If the world were just a fiction movie, or just a little happy tribe, I'd quite agree with them.
Posted by Nick Szabo at 7:28 PM

Excellent article, Nick! Its amazing the rational gaps in these folks reasoning, but then they wouldn't be control freaks if they didn't suffer from such things.

The images! They burn my eyes!

But more seriously, I think that there are a class of problems at which people are good and machines are worse. For example, hotel searches for major cities often return agreggators, rather than the real hotel's site, which, a priori, is what I want. Further, I think that the results we see are likely the result of gaming of the system, rather than the algorithm functioning as intended.

I'm not sure how to generalize from that, but I don't think that makes the point irrelevant or sentimental.

Thanks Mike. I agree with you Adam. The law, auditing, and accounting are largely made up of such human-essential steps, but objectivity and verifiability -- rule and process -- are prized where possible.

But Carr didn't make that kind of point. He was just arguing from an implicit sentiment with which we are all supposed to automatically agree: robot bad, human good. Using a mechanical authority is just a priori bad in his Hello Kitty universe, and various surface flaws are cause for giving up on a potentially verifiable and very efficient algorithm in favor of an imaginary trusted authority.

From what I can gather, the MLK embarassment is caused not by gaming, nor by widespread support for the racist site, but by so many people linking to the site as an example of the idiocy of racism. Unintended consequences. If those linking opponents think the site's high search engine rating is important enough of a problem they will just stop linking to the site and the rating will tank.

Personally, I'd prefer a simple and public (ideally open source) algorithm to one that is completely fair and game-proof. I'm much more worried about hidden gaming by the search engines themselves, and related insiders -- as for example with the Chinese version of search engines -- than with open public gaming of a well-known algorithm.