Today was the probably biggest day in patent law since the passage of the 1952 Patent Act. By a unanimous (9-0) vote, the U.S. Supreme Court overruled decades of Federal Circuit holdings in the most controversial area of patent law, obviousness. And by a 7-1 vote, it ringingly re-affirmed the doctrine that U.S. legal language should be construed to not encroach on foreign jurisdictions unless it expressly does so -- implicitly criticizing the Federal Circuit's failure to respect foreign patent jurisdictions and reversing it outright in the area of software export.

You'd think that engineers, who make the vast majority of inventions, would be the most enthusiastic supporters of our patent system. But most engineers find our patent system problematic, and by far their greatest objection is the plague of trivial patents. This is largely governed by the statutory language forbidding "obvious" patents. This is a notoriously ambiguous word that gives rise to a notoriously subjective area of law. In an effort to provide clarity, the Federal Circuit in recent decades went beyond old Supreme Court precedent and set up a requirement that the patent challenger must show a "teaching, motivation, or suggestion" in the prior art to combine the patent claim's elements in order to show that a patent claim was obvious. It was not enough that common sense or the vast majority of engineers in the field found the patent to be trivial. The Federal Circuit's doctrine thus gave rise to a a flood of trival patents in exchange for achieving some objectivity and clarity. Today in KSR v. Teleflex, the Court rejected this tradeoff and argued that subjectivity ("common sense") should also be used to find patents obvious -- that the Federal Circuit's "teaching, suggestion, or motivation" requirement was far too strict. Instead, the Court held that common sense arguments could be made.

The Court also specifically held in KSR that instead of just looking at obviousness in the context of the problem the problem the patentee was trying to solve, "any need or problem known in the field or endeavor at the time of invention and addressed by the patent can provide a reason for combining the elements in the manner claimed." This provides a much needed expansion of the power to prove a patent obvious without decreasing the clarity or objectivity of the test. Along the same lines, the relevant prior art need not solve the same kind of problem -- the obviousness analysis should include elements from prior art even where that art solved different problems from those addressed by the current patent. Whether the changes to the prior art produce result that could be predicted by your typical engineer in the field (in patent parlance, a "person of ordinary skill in the art" or POSITA) is also strongly relevant -- if the function that results from changing or combining elements from the prior art is predictable by our POSITA, given what is already known about how those elements work individually, the claimed change to or combination of those elements is probably obvious. Unlike the "common sense" approach, the any-purpose and predictable-function tests are quite objective and clear, and I hope the Federal Circuit strongly and fully adheres to them in future obviousness cases.

I'm proud to observe that two of the professors whose patent classes I enjoyed the most, Professor Robert Brauneis and Professor John Duffy, helped KSR make its case for a broader and stronger obviousness standard that should become one of the strongest precedents ever set in U.S. patent law.

Also today in Microsoft v. ATT, the Court came out very strongly for the doctrine that, unless there is express language in U.S. statutes covering extraterritorial acts, U.S. patent law should be construed to not cover them. Seven Justices came out strongly in favor of strict construction in this sense, with only one dissent. Microsoft also holds that mere software instructions do not constitute "components" of patented products: only their specific physical instantiations do. The statutory language makes it an act of infringement to export "components" of patented products overseas that can be easily assembled into a product which if manufactured, sold, or used in the U.S. would infringe the U.S. patent.

Microsoft Windows had already been held to violate AT&T's patent when copied, sold or used in the U.S. When Microsoft snail-mailed a master disk of Windows code overseas, and when it sent Windows code overseas over the Internet, the Federal Circuit held that these acts constituted exporting "component(s)" of Windows and thus was also an infringement. Seven Justices disagreed with the Federal Circuit but differed a bit on just what constitutes a "component". Justices Ginsburg, Kennedy, Scalia, and Souter argued that a specific copy of code instantiated on the specific disk to be installed in the target computer is a component. Justices Alito, Breyer and Thomas disagreed, opining that only software when running on a computer constituted a component -- even the code residing on the specific disk to be installed into a specific computer does not. Only, surprisingly, Justice Stevens dissented that the export of a master disk in this case in itself constituted exporting "the functional equivalent of a warehouse of components" and thus a "component" under the statutory language. I agree with Stevens that software is more analogous to a player piano roll than to the notes on a sheet of music to which the plurality compared it, although I disagree with his conclusion. In the case of a player piano roll and software the human mediated in their execution is trivial -- simply starting up the machine so that the instructions can be copied from the roll or disk and executed on the machine, whereas the blueprints and sheets of music cited by the majority are human- but not machine-interpreted design documents. 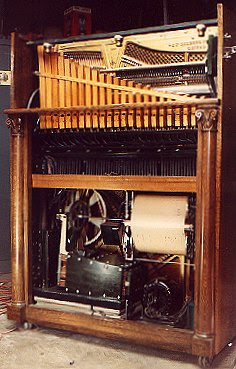 A 19th century player piano ready to play the instructions on its paper roll.

Stevens is right about the analogy, but he misses the point correctly emphasized by the majority -- that statutes are to be construed narrowly to avoid encroaching on extraterritorial jurisdiction. This doctrine argues strongly for not assuming that Congress meant "component" to include anything more than physical parts -- it does not include mere instructions even when those instructions can be automatically executed and constitute the practical entirety of the invention. The majority also pointed out an important policy consideration that Congress probably did not consider: that it might be impossible for the exporter of software to control subsequent overseas acts of copying and use that constitute infringement, and thereby problematic to hold said exporter liable for it, whereas in the case of physical parts the degree of infringement is strictly limited by the number of parts exported.

The Court's ringing restatement of the doctrine that U.S. statutory law be construed to not encroach on extraterritorial jurisdictions could have implications in a number of areas such as the Federal Circuit's holding that foreign sales will not be recognized under the first sale exhaustion rule and cases where the patent's components, for example network nodes, reside in several countries, rather than in a single country. In Jazz Photo the Federal Circuit held that it would act as if sales that occurred outside the U.S. simply didn't occur -- rather like holding that your purchase of a car in Canada cannot be recognized in the U.S., so that you have no right to complain if it is stolen. In the infamous Blackberry case, it held that, because one of the components of RIM's network and RIM's Blackberry wireless e-mail users were located in the U.S., RIM infringed the U.S. patent, even though most of the functionality that violated the patent was located at a relay station and server farm in Canada. The patent challenger in that case had the same option the Court said AT&T had in this case -- to get a Canadian patent and protect its rights in Canada. Instead, it obtained only a U.S. patent and used that patent successfully in the Federal Circuit to attack foreign activities more properly addressed under Canadian jurisdiction. There are many other cases where the Federal Circuit has short-shrifted foreign patent jurisdiction and I hope today's ringing call to respect these jurisdictions will be heeded by the Federal Circuit and that it will thus revisit many of its relevant holdings.

I'll probably have much more to say about these two landmark cases in the future.

Here are the full opinions:

Here are some relevant old blog posts of mine:

On KSR v. Teleflex
On the Blackberry transnational infringement case
On the first sale exhaustion rule

Posted by Nick Szabo at 6:34 PM 3 comments: Links to this post