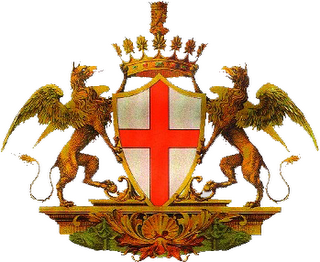 Genovese coat of arms with gryphons and cross of St. George.

Genoa was the most commercially innovative city of premodern times. Insurance, the joint-stock corporation, close cooperation between navy and merchant marine, international trade and exploration, and banking all made substantial progress in Genoa. The basic drivers of these innovations were Genoa's merchant culture and its unprecedented commitment to freedom of contract.

La Lanterna, the harbor lighthouse. 40 meters of rock and 77 meters of tower put the lantern 117 meters above sea level at the harbor mouth. The current version dates from the 16th century, but a lighthouse tower has been at the location from at least the 12th century.

Genoa was probably a significant port under the Greeks, Etruscans, and then the Romans, but is not recorded as playing a major role in history during those periods. It declined in the Dark Ages but revived by the 11th century and was one of the first Italian towns to assert its independence. It played an important role in transporting and protecting crusader fleets and those of the merchants and colonists who followed. During the Crusades it gained footholds on the strategic bottlenecks of the Dardanelles and of the Bosporus across from Constantinople, giving it access to the Black Sea and the Silk Road to China.

The Genovese were the chief commercial innovators of the later Middle Ages, and if anything was key to their innovations it was their advanced contract law and their commitment to freedom of contract. Nothing showed this commitment more than its long struggle against Church doctrine banning usury, which at the time meant any charging of interest. Genovese contracts "hid" interest charges as profits (which were acceptable) or in exchange rates. 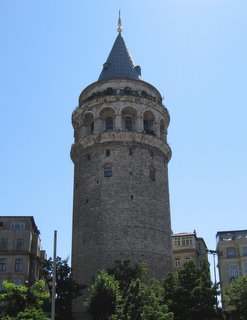 The Galata Tower, built by the Genovese on the Bosporus across from Constantinople during the crusades. Their shared control over the Bosporus opened up the lucrative Oriental trade and allowed them to plant colonies along the Black Sea.

An example of the use of exchange rates to incorporate interest was the "dry loan" which structured interest as a transport charge commonly used in a "wet loan" which were normally paid off in a distant city as a way of transmitting money. Church leaders recognized many of these ruses and complained, but since Genovese municipal judges were, like the rest of the Genovese community, staunch advocates of freedom of contract, and since the Church was dependent on Genovese power (for example to transport and protect crusaders and pilgrims on the seas), the judges winked at these ruses and the Church mostly did not crack down on the practice. In the process of developing these ruses the Genovese became creative drafters of commercial contracts and learned to distinguish elements such as risk, loan, and investment that had been bundled together and treated as inseparable in previous eras.

Perhaps the chief Genovese innovation was modern insurance unbundled from credit or investment:

In short succession Genoa developed insurance, insurance pools secured by landed estates, and reinsurance. Exchanges sprang up for trading public debt, commodity futures, and other commercial paper. Bankruptcy law and the settlement of international trade disputes reached new levels of sophistication. Accounting became widespread and double-entry bookkeeping was born. As a result of their cumulative breakthroughs in institutions and technology, Europeans became the first merchants to travel and trade around the entire globe.

Medieval Genovese merchants, like their Venetian rivals, traveled from Iceland to China. Later Genovese such as Christopher Columbus would lead exploration of the New World.

Insurance developed out of an ancient form of marine finance, a loan that only had to be paid back if the ship returned safely:

The earliest risk-pooling insurance contracts were structured similarly to, and enforced under the same legal principals as, loans. Indeed they bundled a loan from the combined investor/insurer with an insurance clause -- in the event that the ship was wrecked, the loan need not be paid back. In 14th century Genoa, we see the separation of the investor from the insurer, via a contract with its conditional clause but requiring no initial loan. Investment contracts became separate entities and could be contracted with different parties, greatly improving the spreading of risk for these ventures. Such improved risk management was crucial for the explosion of overseas trade that Europe initiated over the succeeding centuries.

One of the most innovative families were the Vivaldis. Frederico Vivaldi was the one of the first merchants to be insured in the new way, and we still have some of his insurance contracts. His ancestors Vandino and Ugolino Vivaldi were famous merchants and explorers of the west coast of Africa, pioneering new discoveries and a lucrative trade that would be exploited much more by the Portuguese starting in the 15th century, taking advantage of its naval control over the Straights of Gibraltar (which Genoa never clearly gained, since before the Portuguese conquest of Ceuta Muslims controlled both shores). Today the University of Genoa sits on the Via Vivaldi, named after this most adventurous of families. 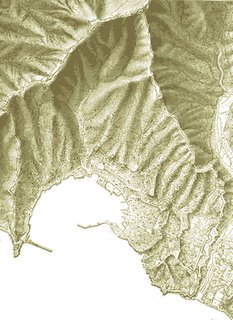 The Genoan topography helped it protect warehouses full of goods, Genoa's main source of wealth, as well as its populace.

Another famous Genovese family was the D'orias. Tedesio D'Oria funded the Vivaldi brothers in their last voyage, an ill-fated attempt at the end of the 13th century to pioneer a route to India -- a feat not accomplished until about two hundred years later by the Portuguese. In the attempt they may have (re)discovered the Canary Islands, which in any case the Genovese would colonize by the middle of the 14th century. Andrea Doria was the most famous Genovese admiral, responsible for defeating the Turks in the naval battle of Lepanto, among other feats. 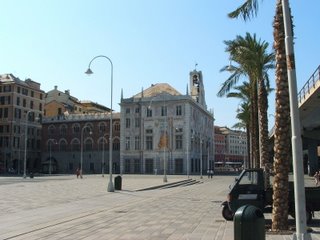 Palazzo San Giorgio (St. George). The Bank of San Giorgio (est. 1407) came to handle most of the municipal debt, providing a prototype for later central banks such as the Bank of Amsterdam and the Bank of England.

The Italian cities often sold off their tax receivables to wealthy merchants at a discount as a way to borrow funds. (Discounting was one of the many ways late medieval financiers avoided the rather lax and formalistic usury restrictions that remained in Genoa). The debts were divided into equal shares called loca or partes. Legally, these debt shares were personal property (chattels) and could be freely traded. 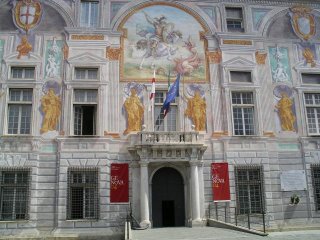 Il borsa (the Exchange). Genoa pioneered in issuing and trading shares of ships and of municipal and corporate debt.

Rather than going to buy receivables from Genoa, subscriptions to the di Chio e di Focea's loca shares (still legally debt, but to be paid out in dividends as taxes and trading revenues were collected) went to fund 29 galleys to conquer Chios and Phocaea. The Genovese Republic, for a fee, granted the organization exclusive rights to collect taxes from the conquered territories as well as special trading privileges. The conquests, taxes, and trading were at least partially successful, and by the 16th century more than 600 persons owned loca of this maona. This function and some of this structure would later be emulated by the Dutch and English India Companies, but with a basic legal difference -- "shares" in these later joint-stock companies would constitute ownership (like ship shares) not debt as with the maona.

Genoa was limited in its naval endeavors because Muslims, and then by the end of the 15th century the Portuguese and Spanish, controlled the Straights of Gibraltar. The Genovese nevertheless supplied several leading navigators of the great Age of Exploration, including Nicoloso da Recco, Lanzarotto Malecello, Antoniotto Uso di Mare, Christopher Colombus and probably the Cabots. Its merchants also played a leading role in investing in Spanish and later English endeavors. But with the Reformation the center of commercial innovation would move from Italy to the Netherlands and England. Those innovators stood on the shoulders of giants, and the biggest such giant had been Genoa. 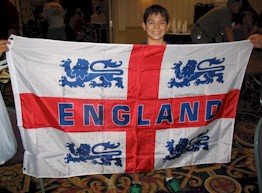 Flag with traditional English symbols: gryphons and cross of St. George. More importantly, England borrowed and improved upon many Genovese commercial innovations, ushering in the modern era of global trade and the industrial revolution.

England was strongly allied with Genoa throughout much of the Middle Ages. It is thought by some that English symbols such as the Cross of St. George and the gryphon derive from this alliance. English ships flying the Cross of St. George in the Mediterranean were protected by Genovese fleets. More importantly, England derived many of the institutions most critical to the development of overseas trade and colonies and domestic industry from Genoa. England, like the Genovese and Portugal (and unlike many other powers of the time such as China) put their navy primarily on the task of protecting its merchant marine. Its joint stock corporations, many of them colonial, derived from the Genovese colonial companies with their interests divided into shares. Lloyd's of London, with "Names" putting up their estates as collateral for reinsurance, still has the same basic structure as the marine insurance pools pioneered in the 14th century by the Genovese.
Posted by Nick Szabo at 5:25 PM

The heraldic beasts on the England flag are lions, not gryphons. (Specifically, lions passant gardant, sometimes called leopards by heralds.)