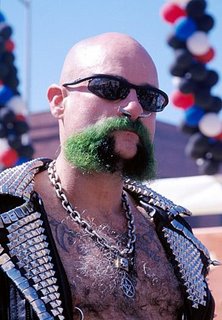 This is a post is for those of you who are fellow fans of evolutionary theories of behavior.

A genetic strategy has been postulated by evolutionary theorists such as William Hamilton and dubbed by Richard Dawkins the "green beard effect." This effect has been observed in nature, though only rarely has it been clearly distinguished from other recognize-and-discriminate systems.

Green beard genes are genes (or more likely small sets of linked genes) that code for the recognition of their presence in other individuals along with discriminatory favoritism of those individuals. Kin altruism, although quite common and treated in this article as a distinct effect, can be thought of as a special case of the green beard effect. In kin altruism genes "recognize themselves" only in probabalistic assemblages, i.e. by degree of kinship (your children and siblings are guaranteed to share 1/2 of your uncommon mutations, nieces and nephews and grandchildren are 1/4 related to you, etc. Note that we are counting new and thus still uncommon mutations, not stable genes: the important question is what will favor or disfavor new mutations. Evolutionary pressure takes ubiquitous genes for granted).

"Green beard" is a misleading name as it has led scientists to look for blatant signals, but as I argue below the effects are much more likely to be subtle and parasitical on other kinds of recognition systems. (I don't know to what extent, if any, the following "green beard"/"blue beard" theory of mine is original, as I haven't thoroughly researched this literature and the theory is at least partially suggested by the papers I have read and cite here). Most evolutionary scientists have thought green beard effects would be rare because they have generally not found such blatant signals associated with clear green beard effects and because green beard effects require the simultaneous appearance of three distinct yet genetically linked traits:

(1) a detectable feature of the phenotype,

(2) the ability to recognize this feature (or the lack of it) in others, AND

(3) different behavior towards individuals possessing the feature versus those not

This argument for green beard rarity is flawed, because a wide variety of recognition systems already exist that can readily give rise to green beard genes, some of the main ones being:

+ conspecific recognition (distinuishing own species from others)

+ maternal recognition of self vs. fetus 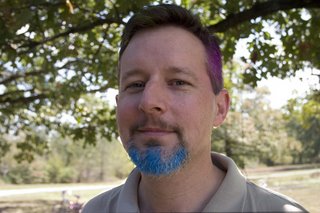 Let's call these "normal" recognition systems "blue beards." They are just as blatant or subtle as signals as "green beards." Any recognition system is imperfect: it is coded for by only some of the genes it benefits, and some of these genes will be more strongly linked than others. The more strongly linked genes automatically favor each other: they are green beard genes. Thus, almost any recognize-and-distriminate system can be expected to give rise to the following green beard cycle:

(1) green beard genes arise within an existing recognize-and-discriminate system (the blue beard genes) and spread in the population,

(3) the noise has enough negative impact on unlinked blue beard genes (beneficiaries of the original recognition system) that the blue beard genes develop modifiers to suppress the green beards.

Alternatively, the green beard genes might have only a slightly deleterious effect on unlinked genes and thus might succeed. Consider the following hypothetical: a recognition system in a hypothetical cuckoo, a brood parasite, is under genetic pressure to favor blue or green tufts as these are the best ways (and blue is slightly better than green) for our hypothetical cuckoos as adults to recognize each other as distinct from their host species' adults which are red. The gene coding for the green tuft, however, is linked to the recognize-and-discriminate genes while a different gene coding for the blue tuft is unlinked. The green beard effect favors the green tuft even though is is slightly worse than the blue tuft as a signal recognition device.

A similar effect might help explain runaway sexual selection for expensive features such as peacock tails: in any sexual selection process, signal genes linked to signal recognition genes will favor each other until they become too expensive for unlinked genes: it's an arms race between the linked green beard genes and the unlinked green beard supression genes, and it may be that full elimination of the green beards is often not the equilibrium. Indeed complete elimination can't be the equilibrium since recognition systems are far from perfect, but almost complete elimination is probably the normal equilibrium. Some examples of exhorbitant display may be green beard genes effects which persist because of the unavailability of mutations for the unlinked genes to modify and thus suppress the green beard genes.

We thus can expect a red queen type arms race between green beard genes and the blue beard genes. That is just what has recently been found in the mother-fetus discrimination system (wherein the mother's cells distinguish mother cells from fetus cells and treat them differently). I expect far more effects like these to be found. 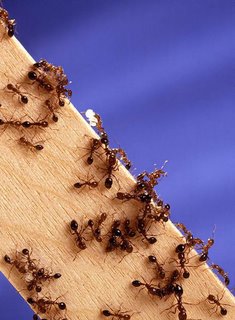 Sometimes green beard genes exist in equilibrium with a counter-effect such as lethal recessives. This has actually been observed in the red fire ant. In this ant, the kin recognition system, normally used by worker ants to recognize and kill unrelated queens, has given rise to green beard gene(s). One of these genes, a pheremone-coding gene, is always part of the green beard: at this gene locus "bb" is a lethal recessive, but "BB" also turns out to be lethal because "Bb" workers reliably recognize and kill "BB" queens just before they lay their first eggs. Thus "B" and "b" exist in equilibrium.

Only a few green beard genes have been observed in nature so far because (1) they are almost always associated with and parasitical on an existing recognize-and-discrimate systems (blue beards), and it is hard for observers to distinguish green beards from blue beards, and (2) they are mostly transient in nature: they are either soon (in evolutionary time) suppressed by blue beard genes or soon come to dominate the population, destroy the original recognition system, and become evolutionarily functionless (i.e. they don't need to code for anything any more once competition is eliminated, so they become just more junk DNA). An equilibrium like that reached in the fire ant will be a rarity.
Posted by Nick Szabo at 9:16 AM