The first installment of this series looked at the most highly developed offshore extraction industry, offshore oil. A wide variety of minerals besides oil are extracted on land. As technology improves, and as commodity prices remain high, more minerals are being extracted from beneath the sea. The first major offshore mineral beyond oil, starting in the mid 1990s, was diamond. More recently, there has been substantial exploration, research, and investment towards the development of seafloor massive sulfide (SMS) deposits, which include gold, copper, and several other valuable metals in high concentrations. Today we look at mining diamonds from the sea. 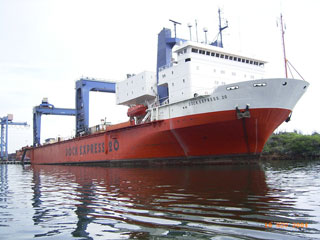 The first major area after oil was opened up by remotely operated vehicles (ROVs) in the 1990s -- marine diamond mining. The current center of this activity is Namibia, with offshore reserves estimated at more than 1.5 billion carats. The companies mining or planning to mine the Namibian sea floor with ROVs include Nambed (a partnership between the government and DeBeers, and the largest Namibian diamond mining company), Namco (which has been mining an estimated 3 million carats since discovering its subsea field in 1996), Diamond Fields Intl. (which expects to mine 40,000 carats a year from the sea floor), and Afri-Can (another big concession holder which is currently exploring its concessions and hopes to ramp up to large-scale undersea operations). Afri-Can has been operating a ship and crawler (ROV) that vacuums up 50 tons per hour gravel from a sea floor 90 to 120 meters below the surface and process the gravel for the diamonds. They found 7.2 carats of diamond per 100 cubic meters of gravel, which means the field is probably viable and further sampling is in order.

DeBeers is also investing in a diamond mine in the seas off South Africa. A retrofitted ship will be used featuring a gravel processing planet capable of sorting diamonds from 250 tons of gravel per hour. It is hoped the ship will produce 240,000 carats a year when fully operational.

The ship will engage in

horizontal mining, utilising an underwater vehicle mounted on twin Caterpillar tracks and equipped with an anterior suction system...The crawler's suction systems are equipped with water jets to loosen seabed sediments and sorting bars to filter out oversize boulders. The crawler is fitted with highly accurate acoustic seabed navigation and imaging systems. On board the vessel will be a treatment plant consisting of a primary screening and dewatering plant, a comminution mill sector followed by a dense media separation plant and finally a diamond recovery plant.

In other words, a ROV will vacuum diamond-rich gravel off the sea floor, making a gravel slurry which is then piped to the ship, where it is then sifted for the diamonds. This is similar to the idea of pumping oil from the sea floor onto a FPSO -- a ship which sits over the wells and processes the oil, separates out the water, stores it, and offloads it onto visting oil tankers. However with marine diamond mining, instead of a fixed subsea tree capping and valving a pressurized oil field, a mobile ROV vacuums up a gravel slurry to be pumped through hoses to the ship.

By contrast to this horizontal marine mining, vertical mining "uses a 6 to 7 meter diameter drill head to cut into the seabed and suck up the diamond bearing material from the sea bed."

Coming soon: some new startup companies plan to mine extinct black smokers for copper, gold, and other valuable metals.
Posted by Nick Szabo at 10:17 AM