In the first two parts of this series I described undersea oil and diamond mining operations. In addition at least two startup companies, Neptune Minerals and Nautilus Minerals, are moving into mining the seafloor for metals. They're planning to dig into extinct black smokers for copper, and possibly also zinc, gold, silver, and other minerals. David Heydon, CEO of Nauilus Minerals, says of the remarkably high quality of the ores, "we haven’t seen these types of mineral deposits since the beginning of modern mining." 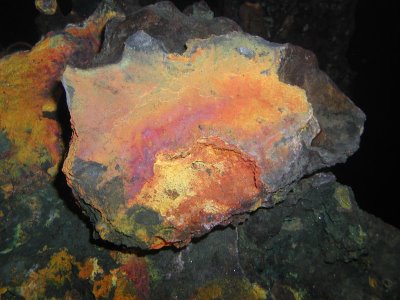 autilus paydirt:
Cutting of an extinct black smoker at 1,600 meters.

Curiously, we may already be mining black smokers: billion-year-old, long-extinct black smokers whose remains now lie on dry land. "The [current live black smoker] deposits have similarities to so-called volcanogenic massive sulfide ores being mined on land in Canada and elsewhere and which formed in ancient oceans as much as 2700 million years ago. Elements of potential commercial interest in both the modern and ancient deposits are copper, zinc, lead, silver, gold and barium. About 150 seafloor sites are known, most of which lie between 1500 and 3500 meters water depth." 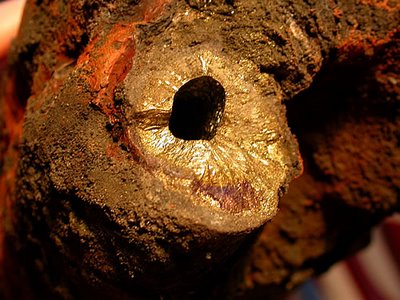 Both Neptune and Nautilus recently performed assays of several promising extinct smokers. Nautilus' assay was performed by two methods: a drill based on a ship (but dropped through 1600 meters of water) and a remotely operated vehicle (ROV) that took cutting samples. Here are at least some of the results. Heydon observes that "with 97% of the ocean floor yet to be extensively explored, it is likely that numerous deposits remain undiscovered."

Here is more from Steven Scott.

Nautilus estimates that it could cost as much as $300 million to ramp up to full-scale mining. Its plans include a $120 million specialized mining ship, the Jules Verne. This ship is similar to the FPSO used for deep sea oil, but will separate ore from sludge and water rather than oil from water. A large ROV, based on the trencher ROV used to lay pipes in the deep sea oil industry, but adding a large rotating drum scraper like those used in coal mining, will scrape the smokers creating sludge which will be pumped up to the Jules Verne and processed. Since the most expensive FPSOs can cost upwards of $800 million, the $120 million is a relative bargain. Indeed, the basic mothership/ROV setup is taken straight from the deep sea oil industry FPSO/ROV methodology.

Nautilus will contribute $120 million to develop undersea tools, including pumps, pipes and two subsea crawler-miners. It will also partner with a group of engineering companies with expertise in drilling and geophysics. If Jules Verne is in place by 2009, it could stay at the Papua New Guinea site until 2014, before moving on to exploit other deposits. Nautilus estimates that it will be able to mine 6000 tonnes a day from its target site.

Although there are technological hurdles to be overcome, ... 'the technology already exists; it just hasn't been integrated in this way. One beauty of the sea floor model is that a floating equipment production chain is our one main investment. Once we have the chain we can easily bring it up and redeploy it to another area.' 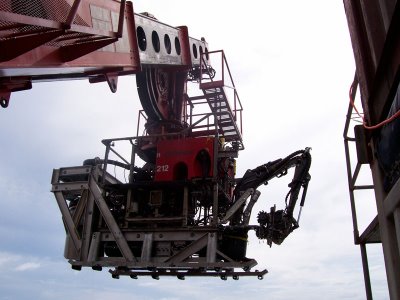 Like many start-ups, Nautilus has a speculative and risky business plan, but the payoff could be vast:

[Nautilus] doesn't expect to reach first-scale production until 2009. There's no comparable traditional mining business model, since many of the individual deposits underwater are too small to be economically viable if they were on land. But because offshore drilling operations can move, whereas mines on land are stuck, the combined value of deposits in a wider area makes the operation worthwhile.
...
The worth of the oil, gas and minerals in the world's oceans is estimated to be in the trillions of dollars. If Mr. Heydon's estimates are correct, deep sea mining could have the potential to supply the world's growing demand for gold, copper and silver, among other metals. The resulting revenue could be in the billions of dollars for deep sea mining companies, of which only two currently exist.
...
Disputes over who owns what in the ocean have been a fact of global politics for decades. For reasons of security, potential resources and sometimes just pride, countries are constantly claiming control over new chunks of underwater property. As an indicator of just how rare it is to be able to mine hassle-free in the ocean, the exploration licence Papua New Guinea granted Nautilus was a world first.

In forthcoming posts in this series, we will look at some of the technological, environmental, political, and legal considerations involved in this new endeavor.
Posted by Nick Szabo at 3:47 PM

Alas, the ecofascists are now trying to strangle this important new industry in its grave.

I plan to cover environmental issues in my next installment.

I'm not sure I trust the mineral companies with their figures, surely they will underestimate costs to help secure investment.