The most startling and important thing you'll notice in these charts is that oil prices are an exponential function of long-run inflation expectations. Put another way, oil prices swing at a rate that is an exponential function of changes in these inflation expectations. The reason is quite straightforward -- inflation, like an interest rate, compounds. With inflation the value of oil in the ground nominally grows in value at the rate of inflation, discounted (in this model at 1%) for the factors indicated above. Thus in this model when inflation expectations are 1% or below, oil trades simply based on supply/demand fundamentals and expectations about these fundamentals, which in this model are assumed constant. Note that we assumd the discount rate (based on time preferences, substitability, property rights security, etc.) should be higher than 1%, that would only shift the exponential curve to the right, it wouldn't change its shape.

Precious metals generally move in the same way as oil in response to changing inflation expectations, but minerals that can be more readily substituted for than oil will probably not as quickly move to extreme prices. So this model and these simulations are just as useful for precious metals as they are for oil, and are somewhat less useful but still explain most of the price movements of most other minerals.

Here is a scenario similar to what we've recently experienced, with a possible further spike due to a small further increase in long-term inflation expectations, with such expectations then subsiding back to near today's value. The simulation starts out with inflations expectations at 1% (assumed to correspond to $10/barrel oil), then the expectations move to as high as 7.5%, which gives us $330/barrel oil: 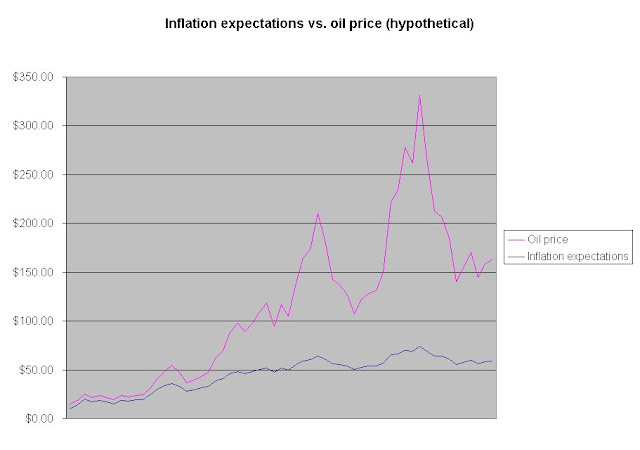 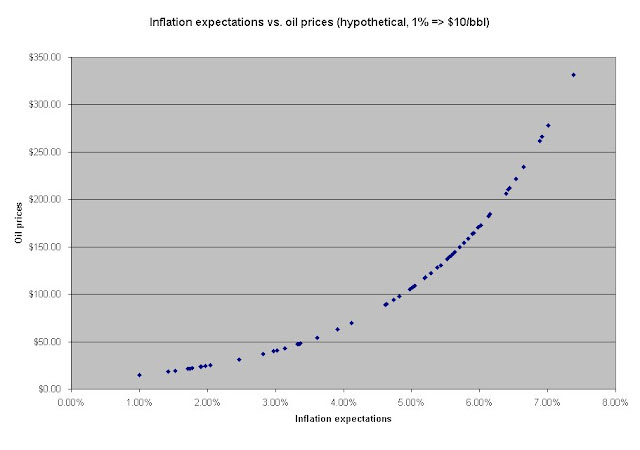 Here is a more extreme scenario of what might occur during a possible U.S. federal default discussed in my previous post. At these extremes, prices of coal, natural gas, ethanol, and other near-substitutes for oil have to keep up with oil, and even the capital costs of more indirect substitutes (e.g. nuclear and alternative electricity) have to lose some of their stickiness and keep up more with oil, otherwise oil will be substituted for and prices won't reach these extremes. My model does not properly account for increased substitability as oil prices increase, which is correct over the long run (inflation eventually reaches all goods and services) but incorrect over the shorter run (because oil prices are much less sticky than most other energy prices). As a result these models probably overstate oil prices at the higher inflation expectation values. Precious metals don't have the same problem, so hedging against the most extreme possibilities is better done with precious metals than with oil or other commodities. 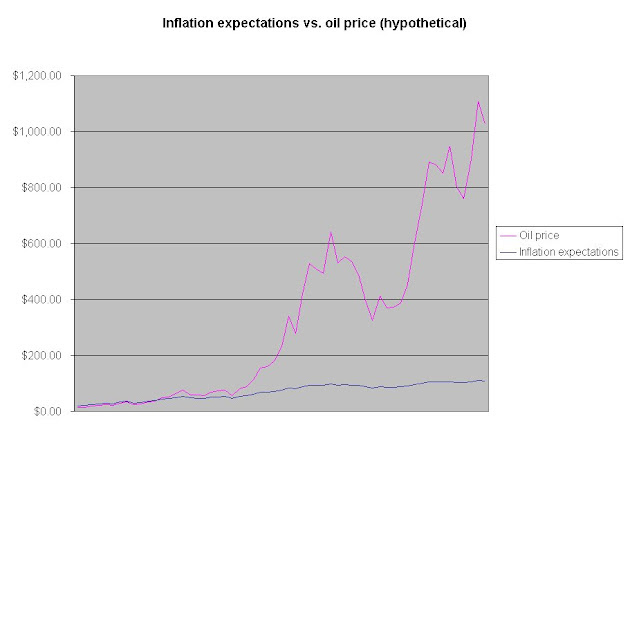 Let's finish with a cheerier scenario, where oil prices start at $130/barrel (roughly what they recently have been) and then inflation expectations subside. I consider this scenario and the first scenario about equally likely, and both of these more probable than the extreme second scenario: 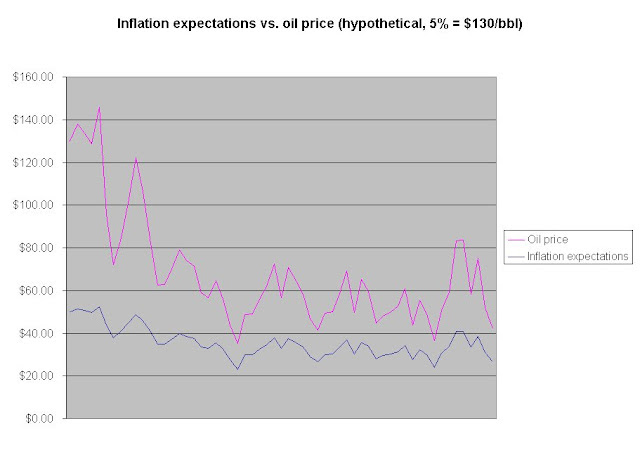