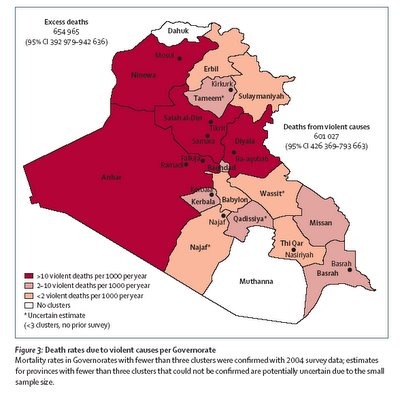 A sample of 12,801 individuals in 1,849 households and in 47 geographical locations shows that the death rate in Iraq increased from 5.5 people thousand people before the U.S. invasion to 13.3 per thousand after. This is almost entirely due to a vast increase in the number of violent deaths.

This implies that about two hundred (200) times as many extra Iraqis have been killed since the U.S. invasion as the number of Americans killed on 9/11. While most of the deaths in the first year were attributed to the U.S.-led forces, most of the deaths since are attributed to insurgents. The study controlled for reporter bias by checking actual death certificates and finding them in 92% of the cases -- pretty good record-keeping and truth-telling for such a chaotic land.

Here is the study. Here is a good discussion of the study. 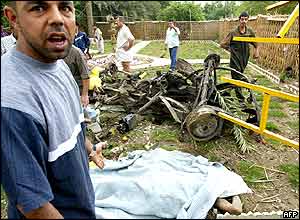