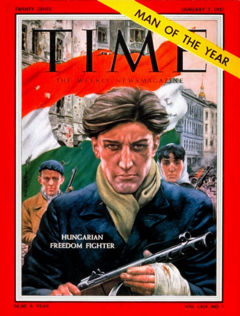 Today was the start of that glorious lost cause that ultimately won, the 1956 Hungarian Revolution. That event is today's featured article on Wikipedia. Since Hungary finally won its freedom from communist rule and Soviet control in 1989, October 23rd has been a national holiday.

Communism was an ideology based on envy of the rich but resulting in devastation to all. The keys to Soviet power were control over business, borders, and ideas. Control of the "commanding heights" of the economy and in particular control over food distribution made it highly dangerous to oppose communists rulers.

The Soviet bloc severely restricted exit, a policy known as the "iron curtain." A communist state was a vast prison camp: the government fed you and you were not allowed to leave. Except for a brief period during the 1956 Revolution, this state of affairs lasted until Hungary opened its borders to free Austria in 1989, leading later that year to the fall of the Berlin Wall and freedom in Eastern Europe. 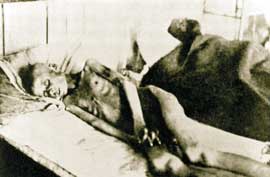 Victim of communist genocide in the Ukraine, 1930s.

The Soviets had a control over the observed reality and beliefs of its subjects that is hard to imagine in today's Internet era. The communist party owned all broadcast stations and newspapers and severely restricted smaller-scale means of communications such as telephones, small printing presses, and copy machines (and later faxes and computers). Government art encouraged secular worship of a godlike Marxist avant-garde, echoing the deification of emperors in imperial Rome. 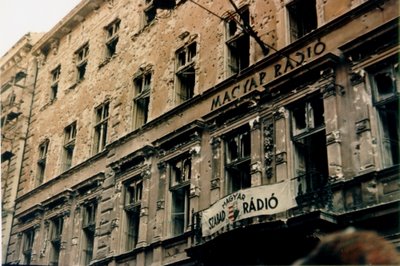 Thus, although the Soviets had already murdered millions, directly and through robbery of food and other vital supplies (as in "Ukranian famines" under both Lenin and Stalin), little was known about these events: behind the iron curtain all mention of them was excised from academia and media; outside the iron curtain they were unknown, denied, or ignored. To this day these events, collectively the greatest mass murders in world history committed by any ideological movement within a single century, remain largely forgotten thanks to the remarkably successful efforts of Soviets in destroying or simply failing to report publicly the evidence. 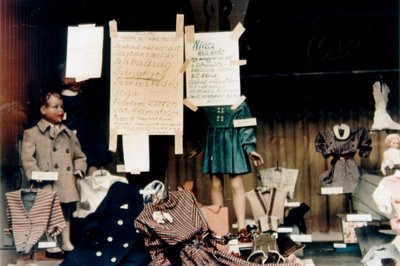 The resignation of the Stalin-era dictator Mátyás Rákosi under pressure from the new Soviet dictator Kruschev in July of 1956 emboldened Hungarians to speak somewhat more freely among themselves. László Rajk, judicially murdered under the Rákosi regime, was reburied and celebrated and the anti-Stalinist Imre Nagy (pronounced "Nahj") was invited to rejoin the Hungarian Worker's Party (the communist party and the only legal party). On October 16th students in University of Szeged boycotted the official party student union and reestablished the non-communist MEFESZ student union which had been banned under Rákosi. Soon students all over Hungary followed suit. 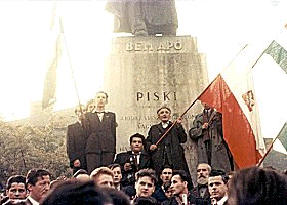 Members of the Hungarian Writer's Union and students, numbering over ten thousand, gathered to demand reform on October 23rd -- 50 years ago today -- at the statute of General Bem, a hero of Hungary's War of Independence in 1849. Students who had brought some Hungarian flags started cutting out the hated communist red star from the flags, leaving ragged circles. By 6 p.m., the crowd had crossed the Danube to the Parliament Building. Enthusiastic locals swelled it to probably well over a hundred thousand. Some enthusiasts toppled the largest Stalin statue, leaving his boots. 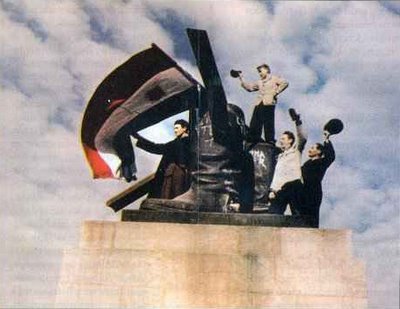 The government radio stations, the only ones allowed, railed that the crowds were "reactionary mobs." ("Reactionary" was the favorite insult of self-styled "progressives" in both the Soviet bloc and the West.) In response a crowd gathered at Radio Budapest, guared by the State Protection Authority (Államvédelmi Hatóság or ÁVH), the communist Hungarian equivalent of the U.S. FBI. When some of the crowd's leaders expressed demands for equal time on the radio to rebut the government's slanders, the ÁVH detained them and the crowd grew even angrier. Soon the ÁVH fired tear gas into the crowd, and soon after that started shooting into the crowd. Hungarian soldiers (of the regular army) were sent in to assist the ÁVH, but when some soldiers witnessed the protestors being fired on they mutinied, joining the crowd. The crowd and its new army recruits fanned out, siezing control of military depots and distributing guns. The Revolution had begun.

Rebels overan the communist party's headquarters and cut out the hated red star from the Hungarian flag. 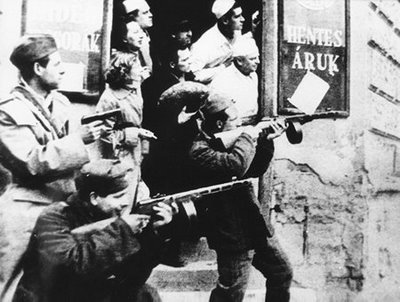 Ghandian non-violent resistance only works where there is a well-established free press sympathetic to the resisters. This was certainly not the case behind the iron curtain in 1956. After the ÁVH fired on unarmed protestors most of the Hungarian Army sided with the protestors, defended them from the ÁVH, and helped them capture the government radio station. With control of the radio station rebels were able to broadcast their rebuttals of the government's slanders, to call for justice against the murderers of protestors, and to make their case for anti-communist reforms. Military depots were raided and arms distributed to civilian rebels, defeating communist gun control.

Is Szabad related to Szabo?

Alas, I am not fluent in or otherwise terribly knowledgable about Hungarian. But I do know a bit about semantics and the metaphorical nature of language, so I'll take a stab at this. A bit of research reveals that szabad can mean "free," "allowed," "loose," "clear," "in the open," or "vacant." Szabo means "tailor" and derives from szab "to cut," thus literally "cutter."

Other related words are (I'm leaving off the accent marks, sorry):

- szabaly (a rule, as in a contract or a statute),

- szabalyozo (a physical device that regulates action or maintains separation between parts, as in a recoil checking device, baffle, thermostat, etc.)

Perhaps there's a metaphor of separation of space or of objects at work here: an act of separation (szab), the state of being separated and thus free to move(szabad), and something that maintains separation or movement, perhaps by restricting movement (szabaly). This leads to a variety words for constraints and freedom from constraints. Thus we might postulate a common root "szab" as freedom of movement (think of the primordial Magyar nomad on horseback), and of physical separation via a loosening or a cutting, with "szabaly" a physical or metaphorical regulation.

Even if the similarities are accidental, there's a connection insofar as cutting the red star out of the flag is a symbol of freedom. :-)

FWIW, Hungarian "sz" is pronounced like English "s" and "s" like English "sh." Different choices in mapping the Roman alphabet onto alien languages with a larger set of phonemes than the Roman letters.

"Give me wide open spaces...", low exit costs, and flags that I can see the sky through!

My goodness, I just inadvertently tied this post to my last post on the pigeonhole principle with that letter-phoneme mapping business. In English "ess" won the game of musical chairs; in Hungarian it lost and they made it sit in the two-letter row. I'll go to bed now. :-)

A correction: The AVH was more equivalent to the KGB than the American FBI, and used the same tactics as the KGB. They were hated, and there were many lynchings during the uprising.

I spent the weekend going with our father to various remembrances. One interesting detail our father pointed out was that the original occupying forces mostly refused to fire on the Hungarians, and were thus withdrawn, giving the revolution about a week of peace. The crushing blow was performed by Soviet troops who originated from east of the Urals and knew nothing about Hungarians. This tactic was repeated at Tiananmen square by the Chinese.

Another odd thing is that many of these new troops though they were trying to attack the Suez. Apparently there were some last minute changes that didn't percolate down to the troops...

I also learned a few things about the tactical use of Molotov cocktails against mechanized troops in an urban environment. I hope never to have to use them.

Thanks Paul! I mentioned the FBI rather than the KGB because many more readers will be familiar with what the FBI is and was than what the KGB was. All three are/were national "secret" police insofar as being national, rather than local (and thus not associated with the community they are policing, but instead forming their own insular community), and many of the activities of all three being undercover or classified. And although you are surely correct that the AVH was far more hated overall than the FBI, many people in the U.S. have hated the FBI at various times and for various things (for example many blacks and civil rights advocates have hated it for spying on Martin Luther King to gather blackmail informatiion, a classic secret police tactic).

That old surveillance, and Soviet-era surveillance, was practically nothing compared to what is now being conducted today within the United States, albeit now it is more socially accepted as part of the "war on terror."

To some extent we don't have more dislike for the FBI for the same reason the proverbial frog doesn't hate the water that is boiling him. For Hungarians communist rule after WWII was a sudden new experience and thus immediate loathed. Elsewhere (e.g. Cuba and North Korea) Stockholm syndrome has more thoroughly taken over and the populations have stopped trying to resist.

There are certainly also differences between the FBI and AVH. They enforced a law that had far less free speech and didn't allow rival political parties, as I described in my post. The AVH sometimes detained people without charges or habeas corpus (for that in the U.S. so far you have to go to the CIA). They sometimes just purposefully executed people withut trial, which AFAIK has never been a domestic policy of the FBI or CIA (unless you count Waco, Ruby Ridge, and many other deaths that the FBI argues were necessary to overcome resistance to search or to arrest). But if off-battlefied killing without trial now happened it would fall under the same legal powers Bush is claiming and Rakosi claimed, namely the arbitrary wartime powers of an executive. In the "war on terror" the entire world includling the domestic U.S. is the "battlefield" according to many government officials.

And of course, the forms of government are different, although I don't see why oppression should be tolerated any more because our fellow citizens voted the oppressors into power.

If you can think of other specific differences or similarities between the FBI and AVH let me know.