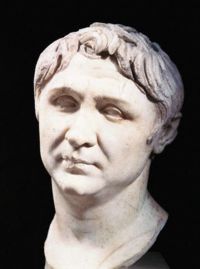 Historical novelist Robert Harris writes a good article on the parallels between Pompey's war on piracy, accompanied by the Lex Gabina, and the modern war on terror and accompanying expansion of unchecked executive power. The ancient Greek historian Plutarch wrote that the Lex Gabina, a response to piratical terrorism at Rome's main port, Ostia, ceded "what amounted in fact to an absolute authority and uncontrolled power over everyone." Literally Pompey was granted an authority to wage war that extended fifty miles inland from any coast, which included Rome and most other major cities and towns of the Republic. Perhaps not far from the arbitrary detentions now allowed under the new Military Commissions Act. The MCA grants the U.S. military the authority to detain either U.S. citizens or foreigners anywhere in the world and try them before military commissions with a bare minimum of due process. If you are not a U.S. citizen, there is no appeal to normal U.S. courts as habeas corpus for you has been suspended, regardless of whether you reside in the U.S.

Pompey did far better than our modern terror warriors: he is reported to have eliminated the pirate threat all across the Mediterranean within three months. But this was not followed by a rescinding of his powers. Rather, military jurisdiction over civilians came to be seen as normal, and political opposition to these powers came to be seen as a form of aid and comfort to rebels or pirates, and thus legally categorized alongside rebellion and piracy. Julius Caesar, followed by Augustus Caesar, would soon usurp Pompey's power, ending the Republic and creating the totalitarian Empire. (Yes, the political plot of "Star Wars" was loosely based on these all too real events).

Another parallel closer to our time was the Reichstag Fire, a terrorist attack which was followed by the Enabling Act. This statute, however, was a far more overt assumptions of arbitrary executive power and abrogation of the constitution than the Military Commissions Act.

The conversion of democratic fear into totalitarian power is a very ancient and devasting pattern.
Posted by Nick Szabo at 2:13 AM